surrounds the woods
as we walk home.

Walking back in time—
to a land, long forgotten.

Drifting once again,
like seaweed being pulled along the current—
pounded by the fierce surf,
giving the illusion of being in control,
as I am battered and tossed upon the shore—
until, like the seaweed—
I am abandoned at the high tide mark,
dry and spent.

Annette Alaine grew up in a working class neighborhood in the suburbs of Washington DC with her five siblings. She has lived in Florida for over forty years. The wild, natural beauty of the land around north Florida is a frequent subject of her poetry.
Posted by Misty Mountain Review No comments:

One poem by Anuja Ghimire

WHEN I WAS RESCUED IN DREAMS

That night in June
A plane landed on my living room in Kathmandu
A sharp 45- degree angle
Right between my cousins, and brother, and I
It had passed through the roof and dodged the kitchen
As wide as my embrace
We continued to talk about samosas and tea
I helped strangers get out of the windows and fill the space
Waking up with outstretched arms in September
Just before the planes hit two buildings in New York
Footage hotter than the flames
I was in Wayne, Nebraska that crisp Tuesday morning
It was like the winter I climbed down Mt. Everest when I was ten
With Sonam Tshring Sherpa on my wrists
They said he was forever an avalanche
But he was light and at peace with the frostbite
Like my palms that were beginning to warm up
Now, I am too cold to see
What I believe to be
Mornings don’t blend with the nights
Places don’t bend with time
And seasons change without magic
When flights are incomplete in December
I cannot save them anymore

I watch the coywolf
maneuver splinters of ice

stacked like pick-up sticks.
Under slate skies, he cries,

protests the thaw;
paces along currents;

as temperatures climb,
as the shore-bound

A lifelong resident of Michigan, CJ Giroux is the author of the chapbook Destination, Michigan, and teaches English at the college level.
Posted by Misty Mountain Review No comments:

One poem by David W. Landrum

We had not imagined swirls: 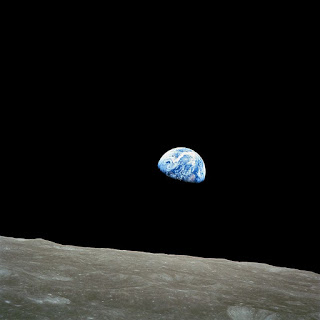 Note: On December 24, 1968, the crew of Apollo 8, the second human spaceflight mission in the United States Apollo space program, sent back a photograph of Earth as seen from their obit around the moon. Up to that point no one had seen the Earth as it looked in space. Those, like me, who saw this revelatory photograph were amazed at the sight—and, most of all, at the beauty and delicacy of the planet on which we live.

David W. Landrum’s poetry has been published, most recently, in Angle, Windhover, Antiphon, Measure, and The Literary Bohemian. He teaches English at Grand Valley State University in Allendale, Michigan.
Posted by Misty Mountain Review No comments:


Wrecked buildings line the side of the street
Traumatized pieces of oxidized ecru lace,

To the side dim lights beamed upward
Lighting the dull clouds lining the evening,

I listen to the grating pulse of the night
Sense the violet shaking of the atmosphere,

I feel the thick wind gusting down the road
Observe broken windows in sad oaken facades,

Beneath my feet echoes of wandering footsteps
Hurl aromas of a wine soaked cigar into my senses,

A tremor rumbles down a cracked alley, as
I touch the blurry feathers of dead birds

Lurching in the eddy of a splintered landscape,
My mind searches for truth but finds only lies

Hiding in corroded iron rods in broken cement,
I close my eyes and I disappear into memories.


My thoughts are reflected in broken visions, my mind mulls over the
world in a muted awareness. I live in a fading consciousness where
images are shattered into bits of the past and present: My mind heavy
with an earthen haze, my soul lost in images of the past. I stumble
painfully down the dusty path rutted in the damp earth, realizing this
trek may be my last, I sigh in sadness. So much to do, so little time
left. Days fly by like minutes, years like months, images… lost visions
shattered into pieces of crystal upon the cobblestones of my life.

I look to my left and see a doe nibbling on fresh new grass, to my
right, a squirrel sits up with an acorn in its mouth, in front of me
lands a blue jay pecking at bugs in the grass, nonchalant of my
existence. I pause from the darkness within and my mind emerges into
the light to concentrate on the beauty of the meadow displayed in
front of me. I smell the fresh aroma of wild flowers and the damp
earth. I look to heaven and give thanks that I can enjoy the
peacefulness and beauty of this wooded place. I smile as the sun
suddenly peeks out from behind the dark clouds and places soft beams
of warmth on my shoulders.

You’re not steppin’ off
of the edge of this world
Ever. So don’t even think
about it. You’ve been hired
to take. In the mercy
of those daffodils
on the wooden table there,
To put your face down,
and vanish into a yellow split second
before you have to change
their water or they’ll die.
You are also an employee
Of the sky—go to the window—
it wants your ache,
It wants you to punch in early
It needs you to see its’
Blue back-bend is part of your own
Heart, and there’s no way around it.

Thank you for dark red buds on the maples,
And mothers singing hush in lamp-lit rooms,
And broken sidewalks drinking in this wet spring moon
And a friend across this town who understands humiliation,
And my father’s pervasive ghost, riding a bicycle,
And the sky’s black face and the river’s black smile,
And the hill’s torn shoulder, and this little slice of time.
But I’m dying.
I have a brother
I can’t forgive.

Jane McCafferty lives in Pittsburgh, PA, teaches at Carnegie Mellon, and is co-founder of the Pittsburgh Memoir project.  She is co-author of a book of poems, From Milltown to Malltown, by Maris Press, and the author of four books of fiction, by HarperCollins and U. of Pittsburgh press. Her poems, stories and essays have appeared in a variety of journals, including Witness, and The Kenyon Review. Her work has received an NEA, two Pushcarts, and The Drue Heinz award for literature, and other awards.
Posted by Misty Mountain Review No comments:

The clouds crumble.
Lightning cracks the troubled sky
with its electric whip
and brightens the sky with its silence.

Tall, tough grasses bend.
That smell of a storm seals
my surroundings against
the fever that stretched across the mountains

Worms, mole-rats, incubating locusts,
and the fossilized dig
or wait in complete darkness.
They live ever-tunneled in the meat and muscle
beneath the skin of Earth.

Do they feel sorry for themselves, encased and blind?

They do four things:

Jessica Wiseman Lawrence studied creative writing at Longwood University, earning a B.A. and participating in the university's M.F.A program. You can find her recent work upcoming or published in Helen, Origins, Antiphon, and Third Wednesday, along with many others. She lives in rural central Virginia, where she is an office manager by day.

One poem by Jill Maria Murdy

Warm, Crispy Autumn
Driving along the Backroads
Crops, and Farms and Fields

Red Barn Peeling Paint
Will it hold on through Winter?
Tired, Sagging Low

Not Realizing
My Journey, Destination
were One and the Same

Jill Maria Murdy is the Director of Liturgy and Music at Saint Frances Cabrini Parish, West Bend, WI. She holds an MA in theology from Notre Dame, and a BS in Music from Dickinson State University.  She writes a weekly column for a liturgical journal, and has published many articles in professional journals.  When she is not doing that, she is cooking, making music, entertaining her cat, or writing poetry. Murdy has a special love hate relationship with the haiku.
Posted by Misty Mountain Review No comments:

One poem by Lee Evans

In the Maine Woods a pool is just a pool,
Unless it is “significant”. You pause
Beside the fragile water that the Law
Protects from folks who set out with their tools,
Disdainfully dismissing as soft fools
The advocates of shrimp, red salamander
And wood frog. It really makes you wonder
How sane men can persist with aims so cruel.
Our present governor is just the guy
To represent their party: He sips tea
And tastes environmental anarchy,
Pooh-poohing any sort of reason why
The forest should stay wild. You wish he knew
The laissez-faire conceived by old Lao-Tzu.

Lee Evans lives in Bath, Maine, and works for the local YMCA. His poems have appeared in such journals as Mused, The Christendom Review, The Metric and Decanto.  His latest collection is available on Lulu.com: http://www.lulu.com/shop/lee-evans/the-hazards-of-being-useful/paperback/product-20597798.html
Posted by Misty Mountain Review No comments: 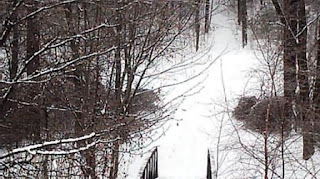 Stretched across the ravine,
this walking bridge
is covered with snow.
Steam lifts from the narrow riverbed below.
The hand-guided ropes
are glazed over with ice.
Raccoon tracks are pepper sprinkled
in front of me like virgin markers
leaving a fresh, first trail.
Once across, and safe,
I toss yellow breadcrumbs across
white snow for starving birds.

Crossing that Canadian line on a visitor pass,
that stretch across the border divide,
that makes a torn war wound, torn man free.
It made my feet new away from red cinder land on fresh grass.
Back home the sirens of war keep sounding off,
like common masturbation from one decade to another.
All us wearing new/old bloodstains,
poetry images of erections coming up, WW2, a real war.
My dirty hands, on your hands, our memories shared red, white and blue justified, hell.
Who does not have memories, bad cinder charcoal smoke screen in the dark flame?
September comes early in Canada-October in the USA.
Leaves fall early swirling in touchdowns both sides of the border.
September north, but at least the bullets cease.
Cast a poem South, you likely die in Vietnam or come back wounded.
Cast a poem North, you likely suffer mental illness but come back on pills.
Here comes again, thunder, in the rain, stroke by lightening,
war bore crossing a border divide.

Michael Lee Johnson lived ten years in Canada during the Vietnam era: now known as the Illinois poet, from Itasca, IL. Today he is a poet, freelance writer, photographer who experiments with poetography (blending poetry with photography), and small business owner in Itasca, Illinois, who has been published in more than 875 small press magazines in 27 countries. He edits 10 poetry sites. Michael is the author of The Lost American: "From Exile to Freedom", several chapbooks of poetry, including "From Which Place the Morning Rises" and "Challenge of Night and Day", and "Chicago Poems". He also has over 74 poetry videos on YouTube.
Posted by Misty Mountain Review 2 comments: 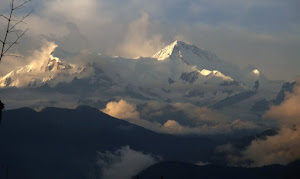